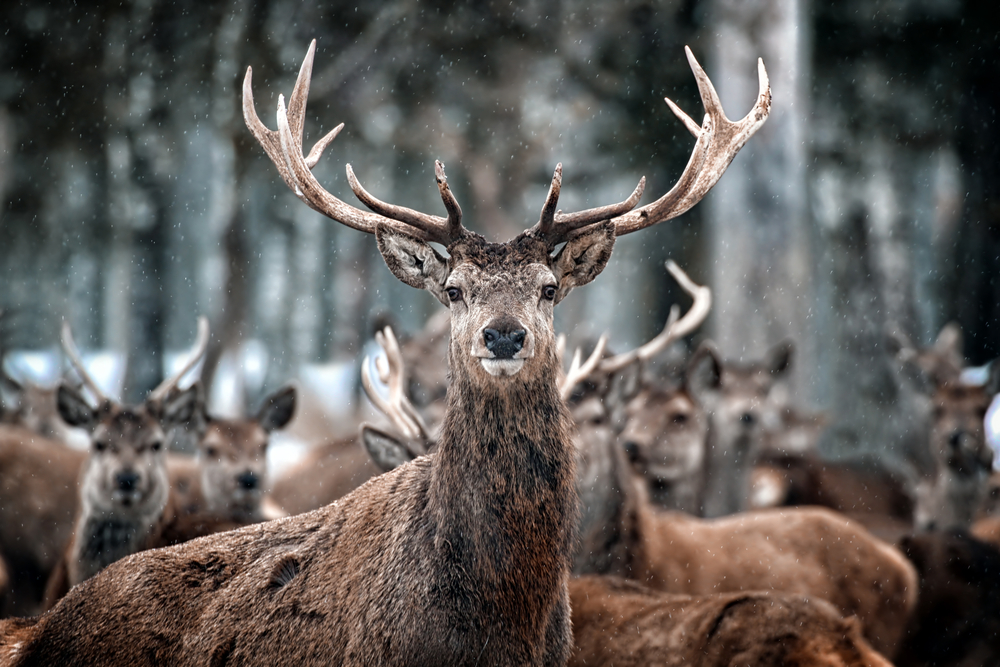 Deer antlers are unique structures that are cast off every year and are the only organized mammalian tissue that is able to regenerate. Antlers grow rapidly from pedicles on the frontal bone of adult male deer (stags) at a rate of up to 2 cm a day. They develop and mature in two broad stages: velvet and hard antler.

Deer antler velvet is defined as a growing antler that has a rich blood and nerve supply as well as intact skin with a covering of soft fine hair, and it is very sensitive. Male deer tend to be non-aggressive to protect it.

Hard antlers have stopped growing and are calcified with no functioning skin, nerve, or blood vessels. In mature adult deer, it takes about 140 days to grow a fully developed antler. During the rutting (mating) season, male deer are combative and aggressive when competing for females. They often spar with their antlers to exert dominance.

Every year, deer living in the wild cast off their antlers around the months of September and October, and new growth begins immediately.

Deer antler velvet is typically harvested about eight weeks after they begin the growth cycle. At this stage of growth, antlers are the most nutrient-dense, and it is the best time to harvest them.

New Zealand is the largest producer of deer antler velvet globally and has developed the National Velveting Standards Body (NVSB), which is a committee that implements a Code of recommendations and minimum standards to ensure the welfare of deer during the removal of antlers. Although harvesting techniques may vary depending on the country, the New Zealand recommendations for the harvesting of deer antler velvet are discussed here.

The removal of deer antler velvet can be done with a variety of techniques depending on the veterinarian’s preferences and the temperament of the deer.

Before surgically removing the velvet antlers, the deer must be restrained by either the administration of prescription-only drugs (chemical restraint) or the use of a physical crush apparatus (physical restraint). Once the stag is restrained, the veterinarian performs a whole nerve block or ring block to ensure that the area is numb and that the deer will not experience pain during the removal procedure.

A brief overview of the steps that must be taken from the beginning of the process to the end is as follows:

Generally, deer velvet products available to people in Western societies is sourced from deer that are managed on farms according to strictly controlled quality assurance guidelines than ensure requirements for animal welfare and husbandry are maintained at acceptable standards.

Since deer antler velvet is a human food product, the NVSB program requires that it be handled hygienically by storing and freezing it in clean plastic containers or bags. It must be frozen in dedicated freezers as soon as possible to minimize bacterial growth and handled in a way that distributes the blood content evenly. Any deer antler velvet that poses a food safety risk cannot be sold for human consumption, especially if the deer have deer pox or ringworm as these can be transmitted to humans.

Deer antler velvet is dried before being manufactured into a variety of different types of supplements. Although processing methods may vary from one manufacturer to another, the main processing techniques and objectives are similar. Freeze-drying is the preferred method of processing deer antler velvet because the use of heat degrades many of the active ingredients reducing the quality of the final product.

The quality of deer antler velvet may also be affected by:

During the freeze-drying process, the outer layer of skin is stripped off of the antler using dry ice and a scraping tool. Then, an alcohol and water solution are used to sterilize the antler and eliminate any bacteria that may be present. By using this process, protein and lipids do not break down resulting in a product that has greater efficacy and potency. Then, the deer antler velvet is ground into a powder. Manufacturers that are dedicated to producing a high-quality product will conduct a chemical analysis of the powder to ensure that the concentration and bioactivity of the final product are retained, and quality standards are met or exceeded.

Not all manufacturers employ processing techniques that ensure the quality of their products. Other methods of drying deer antler velvet include air drying and vacuum drying. Before beginning the air drying process, the velvet antler is thawed in the open air and then washed with water and detergent using a soft brush. The cut end is sealed by cauterizing it on a hot plate.

Air drying can be achieved through two different processes. In the first procedure, the entire stick of velvet antler is dipped in boiling water for a few minutes and then cooled to room temperature, which is repeated several times until the protein is fixed. If the velvet antler remains in the water too long, it will split. During the second option, the velvet antler is placed in a hot oven for several hours; however, the time is dependent on the degree of calcification of the velvet sticks. It is then dried at room temperature. These steps are usually repeated 4-5 times depending on the weather and the size of the velvet.

Vacuum drying involves placing the velvet antler sticks on racks with the cut end up, which minimizes blood loss. It is then thawed overnight by placing the racks in drying rooms where the cooling system is reversed and set to heat to facilitate thawing. The temperature in the drying rooms is then decreased and the velvet remains there until it is semi-dried. After an appropriate amount of time, the velvet antler is placed in a vacuum dryer until it is completely dried.

It is also known that the quality of slices of deer antler parts is affected differently by processing methods.

Several studies have evaluated slices of deer antler velvet and the effects of different processing techniques. In one study, researchers investigated the effect that boiling and freeze-drying had on the total content of nucleosides and nucleobases in different slices of sika deer antler velvet including wax, powder, and gauze slices. They found that all of the slices that did not contain blood had higher levels than those with blood. In addition, wax and powder slices that underwent freeze-drying had much higher levels of nucleosides and nucleobases than those that were boiled.

Deer Antler Velvet in Russia
History of the Deer Industry